Silence… Can You Hear it? Review: Manoj Bajpayee's brilliant acting keeps the level of suspense high in the murder mystery
Advertisement 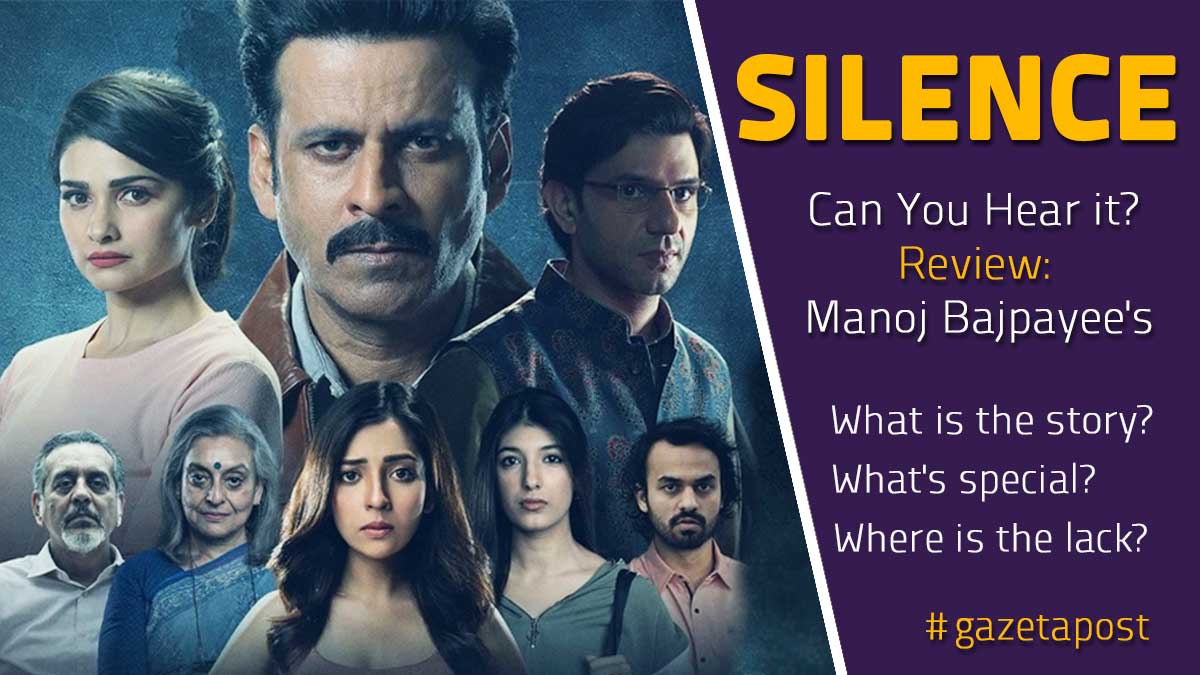 Manoj Bajpayee starrer murder mystery thriller film is streaming on ZEE5. You are going to be convinced once again by the sharp acting of The Family Man 2 star Manoj Bajpayee in this web-film.

OTT platforms have helped a lot in keeping the audience’s thirst quenched during the lockdown days. These days great stories are being served on many OTT platforms. Which the audience does not forget to watch as soon as they get time. One such story is Manoj Bajpayee and Prachi Desai starrer web film Silence… Can You Hear It, streaming on Zee5?

Aban Bharucha is the director of this web series starring Manoj Bajpayee. The specialty of the film’s story is to solve a high-profile murder case within just 7 days. As it often happens, the murderer who is most suspected in a murder mystery or suspense thriller films does not turn out to be the same murderer. That’s what happened in this. The story of the film is quite predictable. Despite this, it has managed to keep the audience hooked to the screen for 2 hours. Let us know what is the specialty of this film.

What is the story?

The story of the film begins with 3 boys who arrive at a trekking site near Pune to enjoy themselves. Here in the wilderness, they find the body of a girl Pooja Chaudhary (Barkha Singh). Pooja is the daughter of Justice Choudhary. Whom someone has brutally murdered. Justice Choudhary chooses a capable officer Avinash Verma (Manoj Bajpayee) to find his daughter’s killer. At the behest of Justice Chaudhary, the commissioner, despite not wanting to hand over the responsibility of this high-profile case to Avinash Verma, a police officer posted in the Narcotics Department.

From here the process of finding the murderer begins. Justice Chaudhary has chosen Avinash Verma because he does not have the patience and does not have the patience to reach his daughter’s murderer. Avinash Verma starts the investigation of the case. The needle of doubt rests first and last on Ravi Khanna, husband of Pooja Chaudhary’s friend. But in the end, the murderer turns out to be the person on whom no one cares.

The biggest feature of the web film is Manoj Bajpayee’s tight acting. After The Family Man 2, if you have not seen his film yet, then you can watch it on Zee5. Manoj Bajpayee as Avinash Verma will again remind you of Shrikant Tiwari. Apart from Manoj Bajpayee, the film also stars Prachi Desai, Barkha Singh, Arjun Mathur, Sahil Vaid, Shishir Sharma, and Garima Yagnik. The biggest highlight of the film is its 7-day long high-speed murder mystery investigation. In which there are many interesting twists. The film does not have unnecessarily bold scenes, noisy background music, and boring dialogues. Which keeps the audience hooked to the speed of the story.

Where is the lack?

Prachi Desai, who was seen in the role of a female police officer, could not fit properly in her character. The kind of boldness and tough style required in the character of a female police officer. She did not see them. Apart from this, no action scene came into the hands of Prachi Desai. Because of which she was seen beating in front of a star like Manoj Bajpayee. The story of the film is quite predictable. Despite this, the director has prepared it very carefully. Due to which the climax does not surprise but the thrill also does not let it down.

The specialty of this web film is a simple story that gradually reaches the end. You can definitely watch this 2-hour film on your holiday. Manoj Bajpayee is the highlight of the film. Which is a guarantee that you will enjoy the film. We give full 3 stars to this film from Bollywood Life Hindi.