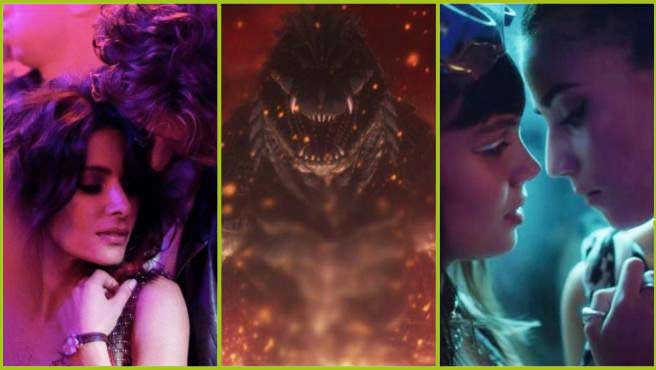 The platform continues to rise in temperature these days.

From Elite to Sex / Life, Netflix welcomes the summer by raising the temperature among its subscribers. Plots with high doses of eroticism, which will also be accompanied this week by new incursions of the platform into anime -with the umpteenth revision of Godzilla- or crimes among the Mexican drug cartels.

Sarah Shahi ( Black Adam ), Mike Vogel ( Bates Motel ), and Adam Demos ( UnReal ) form a new love triangle in the adaptation of the eponymous literary work by BB Easton. The story of a perfect mother and wife, with a high-voltage sexual past. The appearance of your former partner will bring back a world full of passion and pleasures. Stacy Rukeyser (producer and screenwriter for UnReal ) is directing the fiction.

New anime revision of the huge dinosaur born in the 1950s, after the box office success of Godzilla vs. Kong. On this occasion, the series will tell through 13 episodes the story of a researcher and an engineer, who together must face an unimaginable force that could destroy the world. The previous anime trilogy on Netflix, consisting of Godzilla: Planet of the Monsters, Godzilla: City on the Edge of Battle, and Godzilla: The Planet Eater, was met with mixed reviews. Will the streaming service change the opinion of viewers?

This fiction is based on the report Anatomy of a Massacre: How the US Unleashed a Massacre in Mexico, by the American journalist Ginger Thompson. The Mexican series continues the triumph on Netflix of fictions about drug trafficking such as Narcos, addressing the history of the town of Allende, where its inhabitants are at the mercy of the cartel in the area. Project created by James Schamus, producer of the successful feature films Tiger and Dragon and Brokeback Mountain.

Direct from South Africa comes the series created by Busisiwe Ntintili, which tells the story of a street dancer without a future and in a toxic relationship, who is looking for new members for her dance team. The germ of a great life change. The series, halfway between the Street Dance franchises and Pitching the note, is fresh air for the platform with a young and committed cast.

After learning what happened to some of our favorite characters from Las Encinas School in Elite: Short Stories, the new episodes show a new confrontation between veterans and newbies, which will end up exploding with a new victim. The cast again includes Guzmán ( Miguel Bernardeau ), Rebeka ( Claudia Salas ), Samuel (I tzan Escamilla ), Omar ( Omar Ayuso ), Cayetana ( Georgina Amorós ) and Ander ( Arón Piper ). Sex, death, and many insane plots star in the new misadventures of the most elite students.